We finally got our hands on the first production Medieval Madness remake pinball machine today, its been 2 years in the making so we were naturally excited to see this game after all this time!  Was it worth the wait?  Sure was! 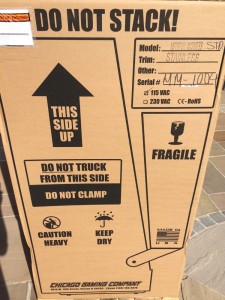 So enough of looking at the box, lets get it open! 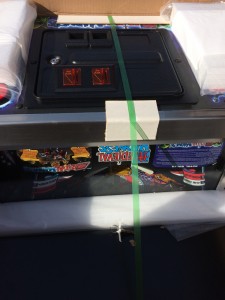 Its looking like a day I remember back in 1997 when the first Medieval Madness Pinball Machines from Williams came over. 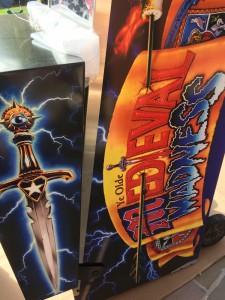 So time to get it into position and set this beauty up! 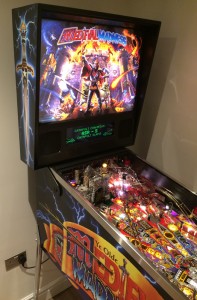 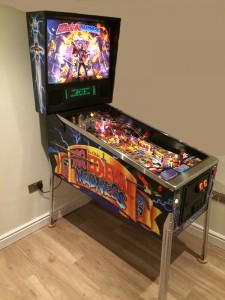 A quick check nothing has come loose during its long journey from Chicago, the home of Pinball for decades.  Yep, good to go, side down the glass, put the balls in and boom!  Its time to smack those trolls!

This is such a great pinball machine and what a credit to Planetary Pinball & Chicago Gaming.  The quality is fantastic and it plays exactly like the original Medieval Madness despite many technology changes, the only noticeable difference to the player is the colour display replacing the traditional orange dot matrix display.  Chicago Gaming have a massive software update for the display which will fully colourise it with resolution change also, due to the flexibility of a standard LCD display vs a traditional 32 x 128 array of orange dots!

This pinball machine will be on our stand at Play Expo, Manchester, 10-11 October 2015 along with many other pinball machines for sale from the UK’s number 1 pinball specialist – Pinball Heaven.  We are the sole distributor for Medieval Madness and other subsequent “remake” games from Planetary Pinball.  I can’t wait to see more classic Williams Pinball Machines rolling off the production like – such classics as Attack From Mars, Monster Bash, is a new Addams Family too much to hope for I wonder?

Have a look at the product page for all the pictures.

Today we are busy making looms to replace the frequently broken BALROG wiring harness.  Easy to install part and available for sale on our UK website now.

If you have problems with intermittent operation of your BALROG switch/lamp then this is probably the problem, due to the 1/4 turn motion back and forth, the wires just break in half, this in itself can cause switch problems if the voltage from the flash lamp touches the switch matrix wires.

FIX IT NOW BEFORE ITS TOO LATE!

Stern release the latest (1.24) version of software for The Walking Dead pinball machine, this release addresses many missing features long awaited by TWD buyers and would-be buyers, there will be more to come and of course we wish Stern would release software in a more timely manner.  Meanwhile, enjoy this video with some of the latest added animations on.

Great news KISS fans, the new pinball machine for sale by Stern Pinball is now “on the line” meaning it is in production.

That means before long you should see New KISS pinball machines hitting the UK shores and in arcades and as we are finding now pinball coffee houses which are becoming a cool new way to experience pinball here in the UK.

Failing that, you can experience your own KISS pinball machine in your home gamesroom or home bar, that way you don’t have to share it 😉

Stern Pinball’s KISS pinball machines reflect the energy, excitement, and experience of a live KISS concert. Players will experience10 famous KISS hits in the concert arena playfield and embark on an exhilarating experience ultimately becoming elite members of the KISS Army. Players score points and finish game objectives to fuel the audience’s energy and excitement. Higher scores amp the experience–the higher the energy level, the bigger and louder the show–resulting in a KISS concert experience like none other. Players are awarded for completing game goals with a variety of in-game front row seats, backstage VIP access and fun multi-ball modes that thrill players of all skill levels.

Pinball machines are big lumps, lets face it!  We offer an in home repair service as well as full workshop facilities for more complex problems at our Preston workshop.

This photo was taken when repairing an Addams Family pinball and Circus Voltaire pinball, the Circus was doing all sorts of strange things, so weird its hard to describe, you would think it was blown logic on the switch matrix but actually, a lose ASIC chip was the culprit.

We added a LED kit to Circus Voltaire to go with the Addams Family which already had a full LED KIT.

We offer full workshop facilities in Preston (we can get your machine collected) plus onsite servicing anywhere in the North of England.  Regularly as far down as Birmingham and sometimes as far as Bristol, Worcester, Bath and even the Channel Islands!

Pinball Heaven is the only place in the world that makes these valuable replacement parts, what a pain in the @$$ they are too!

From a load of wire…. in the beginning to a wonderful product that all Star Trek pinball machines need if they haven’t already had replacements in the past!

Here is the making of another of our funhouse premium restorations!

We start by taking all the old stuff off the old playfield and getting the parts and loom over to the new playfield, replacing as we go.

Every last part comes off the old playfield until all we are left with is the wooden playfield.  Then we have to transplant all the parts and or replace with new, onto the new playfield.  Many hours work goes into making a Premium Restoration machine.  More updates to follow.

Look at this amazing video of Mirco’s robot production of Wizard of Oz pinball playfields.  Amazing!

We have our mobile site running now, access it on your mobile device for pinball parts and machines on the go!

Welcome to our new blog!  Now we can bring you the latest information on our restorations and games for sale plus the news on Jersey Jack Pinball, Planetary Pinball and also Stern pinball.