Since its foundation in 2015, deeproot Pinball,  part of R&D Tech Company deeproot Tech and based in in San Antonio, Texas, has been quietly making progress on its plan to become a major pinball manufacturing company. With a fresh approach to the pinball market, in May this year deeproot Pinball stated they were not looking to “compete with existing pinball manufacturers and churn out the outdated and uninspired pinball package as it exists in the market today” but had chosen a chosen a different path, working on “The simultaneous development on hundreds of unique pinball innovations and tens of titles…”

And deeproot’s progress so far appears to be all positive. They have been in licensing talks for several major pinball titles and have hired among others, pinball machine designer John Popadiuk, who started work in the business for Bally in 1980. They have also hired one of the top ten pinball players in the world, Steve Bowden as their rules designer. So, it was no surprise when deeproot announced that two early prototypes of their first pinball machine, Retro Atomic Zombie Adventureland (RAZA) would be at the Houston Arcade Expo in November, the announcement was met with much eager anticipation. 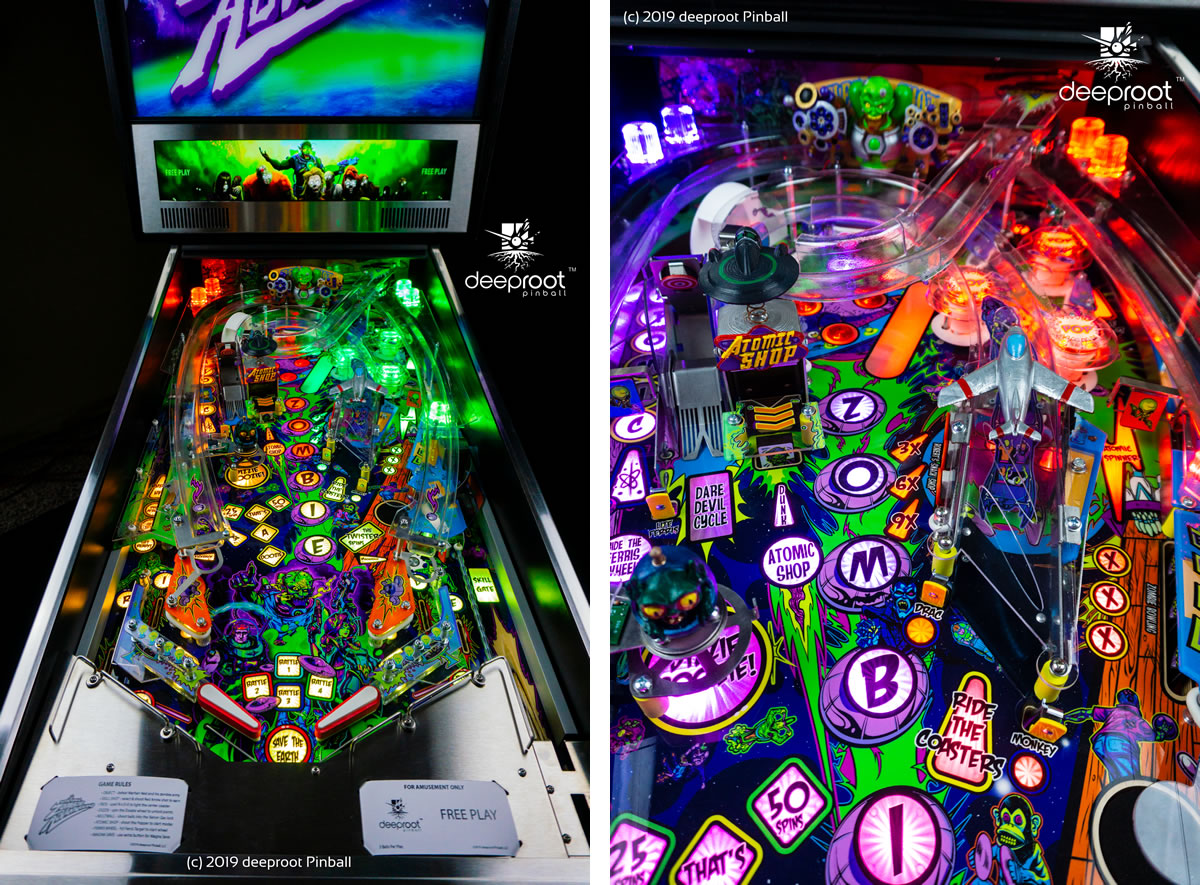 It is important to note that the pictures in this Pinball Heaven blog post of Retro Atomic Zombie Adventureland (RAZA) are shown in prototype form. Some elements such as the cabinet shape and cabinet, backbox and translite artwork are not the finished product, while other features such as the display and playfield layout are not expected to change significantly. It is expected that the final iterations of Retro Atomic Zombie Adventureland (RAZA) could be revealed as early as June next year. Watch this space!

The RAZA prototype cabinet and backbox look very conventional designs, but might change prior to production. The cabinet shown has a very conventional shooter rod, start button and coin door, as well as just a single flipper button on each side.

The playfield too harks back to the glory days of pinball design when game designers were always striving to devise ever more imaginative playfield toys. Retro Atomic Zombie Adventureland was, of course, originally a Zidware design created by John in his studio in Streamwood, Illinois. The design has changed significantly since then with much more emphasis on the theme park elements, although there are a few obvious similarities including the Z-O-M-B-I-E inserts, the centre-left ramp, the orbit lanes and the target at the very back of the playfield.

The new design packs plenty of shots and features into the playfield, including a Ferris wheel, a dare devil cycle ramp with a target at the end, three roll-over buttons in front of a swinging target along with some more conventional drop and stand-up targets and a spinning disc. There are also some throwback references to earlier theme park games by Barry Oursler, who is also designing at Deeproot, such as “ride the Ferris wheel”, “dunk the dummy” and “ride the rollercoaster”.

At the back of the playfield is a swinging target with a model of the chief alien bad guy, Ned, along with a ramp feeding to him. Above this, the colour display is an ultra-wide-aspect panel which gives plenty of space left and right for in-game information but not much height for portrait-shaped objects such as faces, or indeed the game’s logo. Scoring for this ‘retro’ design is kept deliberately low with no trailing zero, but with room for the score to reach just shy of ten million. Speaker grilles are below the panel, not allowing for very large drivers but giving a more integrated look and providing space above for a full-size translite.

These prototype views reveal a promising start for deeproot Pinball’s forthcoming Retro Atomic Zombie Adventureland (RAZA) pinball machine and we eagerly await the reveal of the final visuals sometime around June next year. Model variations and pricing have not been annouced yet, but as soon as we find out, you can be sure we will let you know on this Pinball Heaven blog, so make sure to stay tuned!