September is set to be an exciting month for Pinball Heaven with four new premium machines available from Stern. Which machine should you buy? Let’s take a closer look at some of the individual features to help you decide. Whether you’re a ghost buster or a Trekkie, you certainly won’t be disappointed with the selection.

Travel back to the ‘80s with this vibrant, retro machine based on the classic film. Featuring the hit theme song by Ray Parker Jr., beautiful hand drawn artwork by renowned illustrator Jeremy Packer a.k.a. Zombie Yeti and custom narration from none other than Ernie Hudson — the original Winston Zeddemore — the game is specifically designed to be easy to play but difficult to master.

Along with a motorised and fully interactive target in the form of the notorious Slimer, players will also find a colour-changing Marshmallow Man toy, an interactive ghost hologram target with animations, “paranormal” magnetic action slingshots, distinctive ramp architecture and additional custom moulded toys.

Following the recent reboot of the iconic series, Stern couldn’t have picked a better time to launch their Ghostbusters pinball machine. It may be all about Kristen Wiig and Melissa McCarthy in 2016, but who could forget the original 1984 lineup of Bill Murray as Peter Venkman, Dan Ackroyd as Raymond Statz, Harold Ramis as Egon Spengler and Ernie Hudson as Winston Zeddemore?

With the Limited Edition model selling out in just 12 hours worldwide, you won’t want to waste any time now that the Ghostbusters Premium Pinball Machine is available for sale in the UK. If you think this might be the pinball machine for you, you’re in the right place—Pinball Heaven is the only UK supplier to have stock! See our listing here. 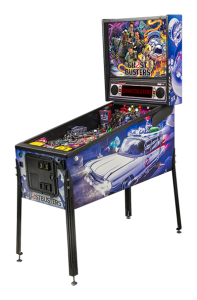 Stern’s collection of iconic rock and roll machines is growing, and the latest addition honours one of the world’s most influential rock bands. A must-have for heavy metal fans, the premium edition of the machine features art by Metallica’s choice artist, Dirty Donny, and a soundtrack of 12 Metallica songs—all performed by the band themselves.

Players will be able to bang both their heads and their flippers to classic Metallica hits including “Master of Puppets,” “Fuel,” “One” and “Fade to Black”, setting the tone for an exciting in-game experience. The band’s famously fast tempos and aggressive musicianship provide the perfect accompaniment to an action-packed game with unparalleled magnetic activity.

Formed in Los Angeles back in 1981, Metallica have been making iconic metal music for over three decades. What better way to celebrate their greatest hits than with this awesome machine? If you’re ready to rock your way to a new high score, Pinball Heaven is the only supplier with stock of the Metallica Premium Pinball Machine for sale in the UK. Available to order here. 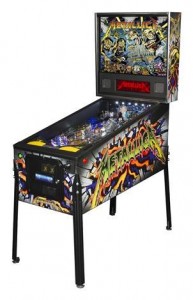 Set to The Walking Dead’s original score, the game includes multiple zombie toys and features familiar locations used on the show, such as the Prison and Cell Block C. Players will be given the chance to defeat Prison Walkers, collect supplies, complete various game missions and play action-packed modes that are sure to heighten the excitement.

The machine presents everything fans of the show would want in a flesh-eating pinball experience, including a special-effect fish tank with illuminated sculpted zombie heads, a player-controlled motorised crossbow pinball launcher and a whole host of additional targets for adrenaline-filled battles. Watch out for the Well Walker! See the full features list here.

Holding the title of the most watched series among adults aged 18-49, AMC’s The Walking Dead is based on a comic book series written by Robert Kirkman, Tony Moore and Charlie Adlard. The drama stars Andrew Lincoln as Rick Grimes, Steven Yeun as Glenn Rhee, Norman Reedus as Daryl Dixon and Melissa McBride as Carol Peletier, and tells the story of the months and years following a zombie apocalypse.

Whether you’re a fan of The Walking Dead or simply a fan of gore and zombies, then this is the machine for you. The Walking Dead Premium Pinball Machine is now available in the UK and for sale here on Pinball Heaven, one of the only UK stockists. See our listing here. 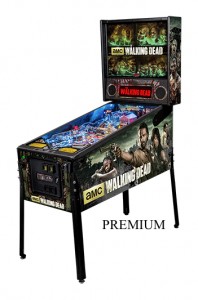 Take a seat in Captain Kirk’s chair with Stern’s first all-LED pinball machine. Inspired by the Star Trek and Star Trek Into Darkness films, the Star Trek Premium Pinball Machine features all the bells and whistles a Trekkie could ask for, mapping out the classic battle between the heroic Enterprise team and the villainous Khan, as well as run-ins with Nero, Klingons and the Narada.

The play field features seven multicoloured LED paths that lead gamers on fast and fluid colour-coded routes, complete with six missions for casual players and 18 complex treks to immerse enthusiast players deeper in the game. From the very start, players will have the chance to unlock special opportunities, collect bonus features and win a series of accolades called ‘The Captain’s Chair’. See the full features list here.

If you think you’re ready to embark on a journey to protect and defend the planets of the Federation, this is definitely the game for you. The Star Trek Premium Pinball Machine is almost out of production and unlikely to be run again, meaning Pinball Heaven has some of the very last few for sale in the UK. See our full listing here. 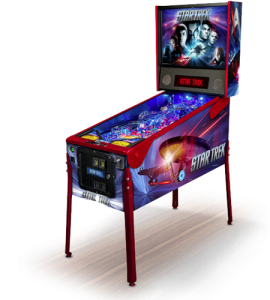 Pinball Heaven has the largest stock of brand new games of any UK dealer. With our unique 2-year warranty, you can rest assured that your experience will be worry-free—even after the warranty has expired, you will still have access to our lifetime technical support package on your pinball machine.

To keep up-to-date with the latest pinball machines for sale, be sure to follow Pinball Heaven on Twitter.