Godzilla is recognized by Guinness World Records as the longest continuously running movie franchise in history, having been in on-going production from 1954 to the present day; a total of 28 Japanese films, plus two American films released in 1998 and 2014 have been produced.

Three years ago it was rumoured that Spooky Pinball was set to produce the new Godzilla pinball. Charlie Emery, who runs Spooky Pinball, is a huge Godzilla fan and when he dropped a hint on the Spooky Podcast that they had secured a new licencing deal, the consensus was that it must be Godzilla. However, news broke later in the year that Stern Pinball had secured the Godzilla licence. Little has been heard since, but recent rumours suggest that Godzilla could now be Stern’s next release. 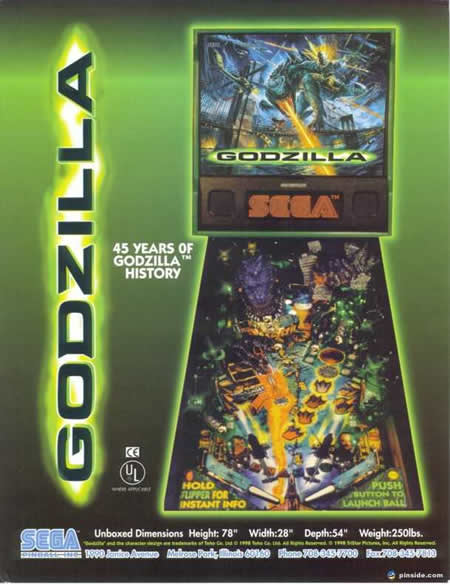 In the 1888 film an iguana nest is exposed to the fallout of a nuclear test in the South Pacific. One of the creatures, Godzilla, travels to New York, causing mayhem along the way and is eventually killed. Later, in the ruins of Madison Square Garden, a single surviving egg hatches and the hatchling roars. The Sega pinball machine expands on the film plot, with the surviving Godzilla egg hatching and once again putting New York under attack.

Designed by Joe Balcer, with artwork by Morgan Weistling and software by Neil Falconer and Orin Day, only 516 Godzilla pinball machines were ever produced. The solid state Sega Godzilla was marketed as “The Meanest, Greenest Game on the Street!” and featured 4 balls, 2 flippers, 4 ‘radioactive breath’ magnets, 6 multiballs, including wizard mode, and a shaker motor.

Sega Godzilla had fairly simple rules. There were lots of multiballs and hardly any modes, but it did include a thought provoking risk/reward strategy. Do you cash in the multiball, or try to get more lined up before starting it? Starting a new multiball from within a multiball was fine, it increased the jackpot and you received a new ball save. But for the really big points you needed to start all five together.

In the 2014 Godzilla reboot, the 30th film in the Godzilla franchise, a soldier attempts to return to his family while caught in the crossfire of an ancient rivalry between Godzilla and two parasitic monsters known as “Massive Unidentified Terrestrial Organisms” or MUTOs, that eat radiation trapped underground.

The film was praised for its visual effects, musical score and cinematography; all features which would greatly benefit a 21st century pinball machine, and all features Stern have been developing over recent years. 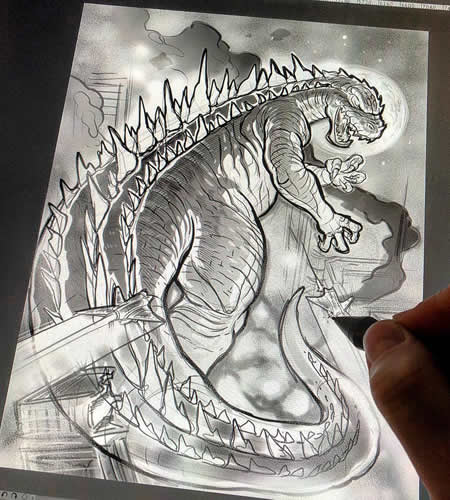 Zombie Yeti has contributed top drawer artwork to recent Stern releases such as Iron Maiden, Deadpool, Teenage Mutant Ninja Turtles and Avengers Infinity Quest, and a new Zombie Godzilla cabinet, back glass and playfield would more than deliver. But what would it look like?

The smart money must go on a blue coloured theme, certainly for the LE version, as Godzilla’s infamous heat ray, which is more powerful than fire, is typically blue in color. And Stern’s recent use of playfield video, as featured on TMNT and Guns N Roses, could enhance the look by projecting Godzilla’s heat ray on to the playfield itself.

The action in the 2014 movie takes place in Japan, Honolulu, Hawaii, Las Vegas and San Francisco. So, the playfield could walk you through these different zones.

With a nod to the 1998 Sega classic, a modern and perhaps more challenging take on the original multiball could prove a big hit. An animatronic Godzilla with ball lock and the ability to unleash 4 balls into multiball play, in a similar way to the TMNT van would do the trick. And how about a couple of animatronic MUTOs that regurgitate pinballs, just like the T-Rex in Stern’s Jurassic Park Premium and LE? This is beginning to sound like a four-flipper game. And of course we will need a shaker motor; if ever a theme needed one this is it.

I wonder if Gary Stern agrees?