Our stand featured some of the latest pinball machines for sale from Stern pinball, Jersey Jack Pinball, Day One Pinball and Planetary Pinball, we have such games as Stern Pinball Game of Thrones, Medieval Madness pinball machine, Jersey Jack Pinball Wizard of Oz, Stern KISS, Stern Walking Dead and a unique machine in the form of a retake on 1930’s pinball by Day One Pinball.  For those unable to come to the show, have a look what you missed!

We had pinball parts for sale including Novus Plastic Polish, Millwax, Jersey Jack T Shirts and promo items along with our fabulous new range of XPin replacement pinball displays and PCB’s along with all the latest pinball machines on display on free play, apart from the latest Stern Pinball release, Game of Thrones which we put on £1 per play with the entire cashbox being donated to Teenage Cancer Trust, the whole pinball show has a charity foundation, with past years raising over thousands of pounds for the TCT.  This year with the help of Jersey Jack Pinball we were able to be part of the charity raffle to win a brand new The Hobbit Pinball Machine.

There were games from the 1960’s vintage era of pinball machines upto the latest games.  Plus some classics such as, Addams Family pinball machine, Indiana Jones, Dracula, Star Trek, Scared Stiff, Circus Voltaire, AC/DC pinball, Lord of the Rings, Whirlwind, Pirates of the Caribbean, Terminator 2, The Simpsons Pinball Party, Creature from the Black Lagoon, Tales of the Arabian Nights and Twilight Zone pinball machine.

Some of these games belonged to loving collectors who would never part with their pride and joy yet some were brought to the show either for sale or to exchange with fellow collectors, there are always pinball machines to buy at these shows, either from traders like us or from private collectors, plus its a great way to meet people with the same interest at you.

Pinball high score competitions can get quite competitive and are always an interesting part of these shows with many different stages in which you can enter.

Did you come and say hello to us at the show?!  We were rammed out ALL day from the second we arrived until we finished! 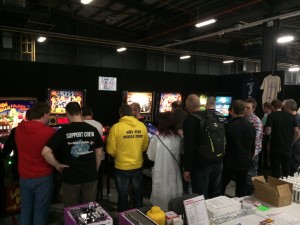