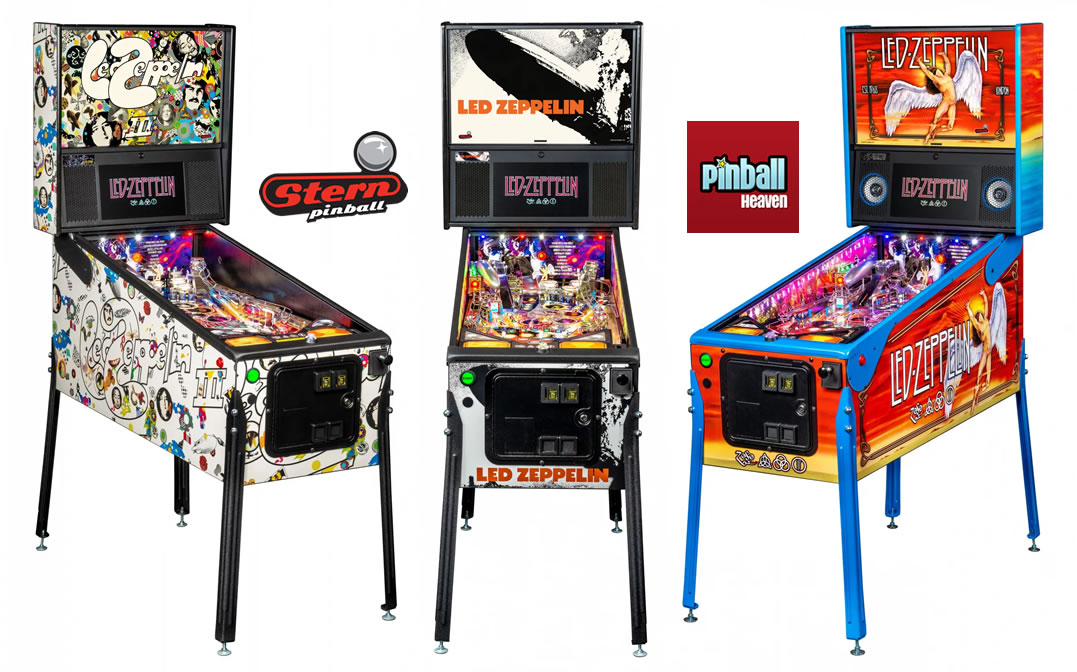 Formed in London in 1968, Led Zeppelin consisted of vocalist Robert Plant, guitarist Jimmy Page, bassist and keyboardist John Paul Jones, and drummer John Bonham. Together they became one of the best-selling bands with estimated record sales of 300 million units worldwide. In 1995 Led Zeppelin was inducted into the Rock and Roll Hall of Fame for their innovative and influential impact on the entire music industry.

In this high energy rock and roll pinball concert experience, pinball and music are fused together. Players are transported back to Led Zeppelin’s early days and tour the world from 1968-1980. As if players were members of the band playing its music, their play updates game features at the start of each verse and chorus of ten iconic Led Zeppelin songs: Good Times Bad Times, Whole Lotta Love, The Song Remains the Same, Rock and Roll, Trampled Under Foot, Ramble On, Kashmir, Immigrant Song, Black Dog, Communication Breakdown.

There is no speech from the band in the game. Instead, American comedian, actor, writer and musician Brendon Small provides the voice calls. However, the unmistakable faces of all four band members: frontman Robert Plant, guitarist Jimmy Page, bassist John Paul Jones and drummer John Bonham are emblazoned on the playfield.

The Pro, Premium and global release of just 500 Limited Edition Led Zeppelin pinball machines all feature a custom-moulded Hindenburg Zeppelin toy, based on the iconic imagery from the Led Zeppelin I album. When lit, the Zeppelin toy scores speed locks on the player’s musical journey to Zeppelin multiball.  A custom Swan Song Records Icarus sculpted leaper toy takes flight when smashed by the chaotic pinball. A 3-bank of drop targets, 3 custom steel ramps, and 3 flippers keep the pinball action rolling.

There are 4 Spell out rules for racking up scores and opening opportunities of game advancement: L-E-D, Z-E-P, R-O-C-K and R-O-L-L. This consists of 4 R-O-C-K Stand-Up Targets light Zeppelin Speed Locks, 3 L-E-D Stand-Up Targets and 3 bank Z-E-P drop targets which add action and rebound shots to help complete L-E-D & Z-E-P. Drop Targets can be swept with the upper right flipper.

To give the game the perfect immersive Led Zep atmosphere, players can select the song choice at the start of every ball, plus all models feature an all-new software controlled 10 band graphic equalizer, so you can tune the sound to your particular liking!

“There is nothing more energizing and fun than bringing pinball and music together,” said Gary Stern, Chairman and CEO of Stern Pinball, Inc.  “Partnering with Led Zeppelin, we created a one-of-a-kind pinball experience.  It’s our dream goal to create a pinball machine with this iconic rock band.”

To enquire about or order a Stern Pinball Led Zeppelin Pinball machine, visit our online shop, or call Pinball Heaven on 01772 816 677.