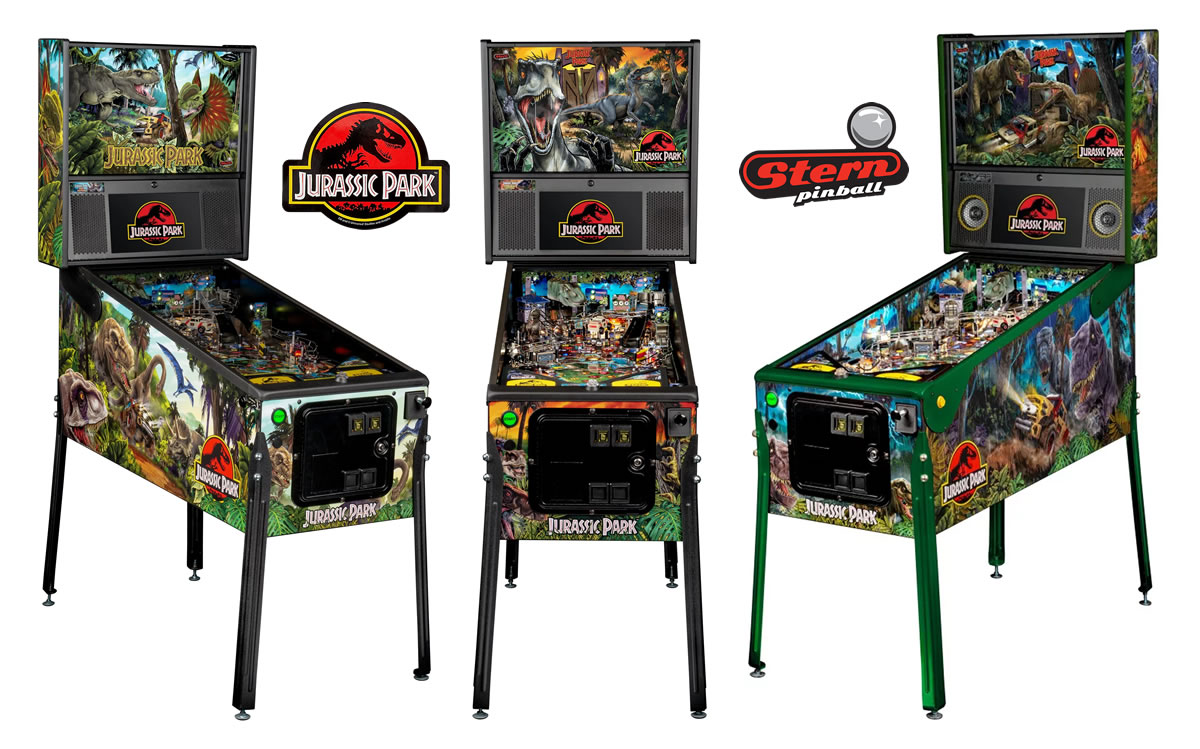 The original Jurassic Park pinball was launched in 1993 and was considered by many to be one of the greatest Data East titles ever produced. Jurassic Park pinball was fully loaded and came factory equipped with a topper, shaker motor, 3 scoops and several innovative features, a “taser gun” shooter featured a “Smart Missile” which was a homage to the 1981 arcade hit Defender. A large motorised t-rex head not only looked around as you played, but could eat and swallow the ball, only for it to appear elsewhere on the playfield!

Following the buyout of Data East by Sega and marking the release of the Jurassic Park sequel, in 1997, Sega launched their Jurassic Park: The Lost World pin, however sales of the Sega machine were said to be significantly lower than the original and in 1999 Sega Pinball sold out to Gary Stern.

Fast forward 20 years and Stern’s new Jurassic Park pinball machine, the third machine to be based on the 1993 film, boasts full colour, HD monitor, although it doesn’t seem to display movie scenes but custom graphics instead, and an animatronic T-Rex that regurgitates pinballs in the Premium and LE versions.

Like the blockbuster movie, the Jurassic Park pinball experience generates heart pounding excitement as the player progresses through the game. As the game starts, the player is transported to Isla Nublar, an amusement park where escaped dinosaurs are running amok! The player’s mission is to rescue park staff and recapture dinosaurs from the chaotic environment unleashed by Dennis Nedry’s computer virus. All dinosaurs, however, are not created equal as players will battle Raptors and the mighty T. Rex! The game immerses players in the fun world of battling dinosaurs in an action-packed adventure filled with twists and turns.

The Premium and Limited Edition models feature an amazing animatronic ball-eating, ball-throwing T. Rex that interacts with the ball and the player. These models also include an interactive Raptor and Raptor Pen featuring a ball-lock mechanism guarded by a motorized gate. The action does not let up with unique mosquito-in-amber pop bumpers and a custom metal horizontal helicopter spinner.
“Jurassic Park is a classic film featuring what everyone loves­­­­­ – dinosaurs! The game is designed to be easy to play, but difficult to master,” said Gary Stern, Chairman and CEO of Stern Pinball, Inc.

You can buy a Stern Jurassic Park Pinball Machine from our online pinball shop, alternatively call us on 01772 816 677.