Following the success of Stern’s 2008 Batman pinball machine, which was based on the films Batman Begins and The Dark Knight, in 2016 Stern gathered together a Hall of Fame pinball development team to create an all-new Anniversary Edition machine, to celebrate both 30 years of Stern Pinball and 50 years of the Dynamic Duo of Batman and Robin.

Based on the Batman television series from 1966, Batman ’66 was inspired by Joe Kaminkow of Ka-Pow Pinball and spearheaded by Stern Pinball product development chief George Gomez, who along with renowned programmer Lyman Sheats, brought the game to life.

Batman ’66 is regarded as one of the best pinball machines Stern Pinball have made, fantastic game play and audio/video from the original classic Batman TV series.

Batman ’66 immerses players in campy fun and heart-pounding action as the crime fighting Dynamic Duo comes to the aid of the Gotham City Police. Throughout the game, Batman and Robin work to deduce clues and discover super villain plots in an effort to thwart evil plans and capture bad guys. Players are guided through the game by the voices of none other than the original Batman and Robin, Adam West and Burt Ward. 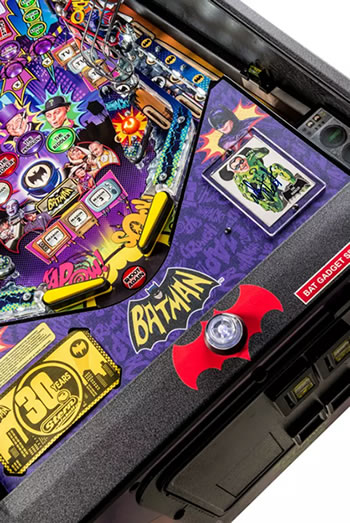 In addition to the fun title and game experience, the machine also features a full colour high definition display replacing the dot matrix display. In conjunction with Stern’s new SPIKE-2 electronic pinball platform, the display enables high definition graphics and innovative animations. This enables the game to feature actual TV footage from the iconic series. The game includes a second high definition display on the playfield as part of an interactive game feature.

To order your Batman ’66 Premium Pinball Machine by Stern Pinball, call Pinball Heaven on 01772 816 677 or visit our online pinball shop.