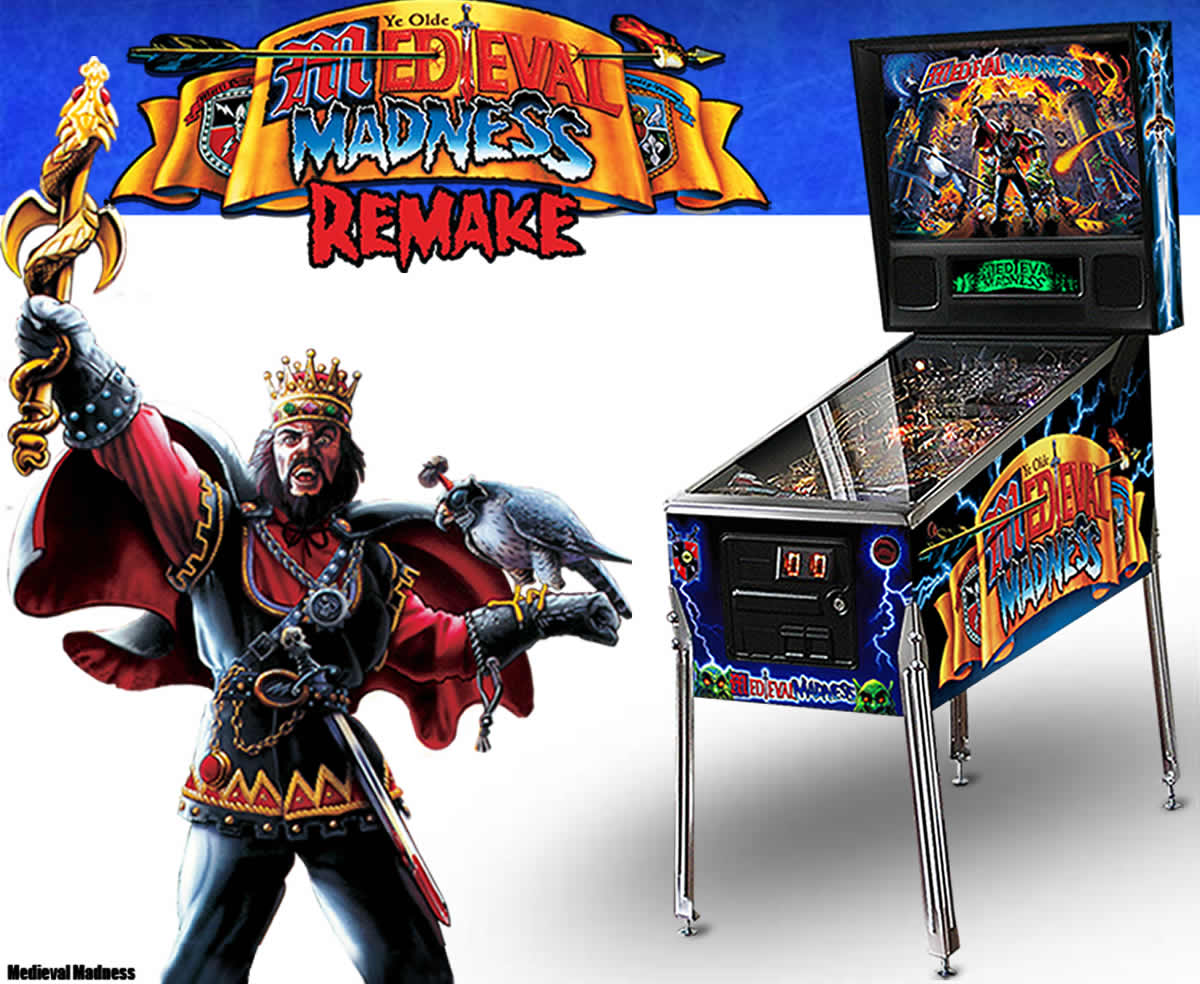 One of the all time top 5 pinball machines has been lovingly remanufactured by Chicago Gaming in USA and now you have the chance to own one of the best new pinball machines ever made, for sale exclusively in the UK at Pinball Heaven.

Chicago Gaming is pleased to offer the rebirth, under license from Williams Electronics Games Inc. of the original smash hit pinball machine, Medieval Madness. Recreated to the exacting standards of the original game, this remake contains a number of enhanced features not available on the original game including: modern electronics, fully adjustable color display, all LED lighting, and class D digital audio amplifier.

Medieval Madness is widely held to be one of the best pinball machines of all time. This status coupled with the fact only 4,000 of these games were built has driven the resale value of the original game beyond the reach of most pinball collectors.

Whether you are a pinball novice or expert, you’ll come to appreciate the game’s universally appealing gameplay, which includes the exploding castle, motorized drawbridge and two pop-up trolls. Your mission in this multi-ball game is to battle for the kingdom! Step back in time to the middle ages of the 15th century where kingdoms were fought and lost for.

Never replace a bulb again! The new Medieval Madness pinball machine features all LED lighting. Great effort was invested in recreating the warmth and feel of the original incandescent bulbs with the modern reliability of LEDs.

MMRs system hardware and software slowly ramp LED brightness up and down to emulate the look of the original incandescent bulbs.

The LED manufacturer rates the life of each individual LED at 50,000 hours if driven to full brightness. Each playfield insert is backlit by a cluster of three LEDs which are driven only to one-third the manufacturer’s specified maximum brightness. Should any of the three LEDs in a single insert cluster ever fail, the system hardware will automatically increase the brightness of the remaining LEDs to compensate for the failed LED. This redundancy, coupled with the long life of the LEDs, means most owners of the Medieval Madness remake will never replace a single lamp over the game’s lifetime.

The new features menu allows the operators to:

The new Medieval Madness Pinball Machine is available in Classic Edition, Special Edition and a very special Royal Edition. All three models boast the all-new LED lighting. In addition, the Classic Edition features a 13-1/8″ display and stainless trim. The Special Edition features the same stainless trim but with an XL 19-1/4” display, along with an HD colour upgrade, premium enhanced sound system, RGB LED general Illumination and RGB LED back board lighting.

For those of you interested in the Medieval Madness Royal Edition, please note that the production run is seriously limited, so these Royal Edition machines will not be available for long!

To enquire about the Chicago Gaming Medieval Madness Pinball Machine Remake, contact the official UK Distributor, Pinball Heaven on  01772 816 677 or email us

[…] The new pinball machines shipped included: • Houdini and Oktoberfest by American Pinball • Medieval Madness by Chicago Gaming • The first Rick & Morty Pinball by Spooky Pinball to land in the […]