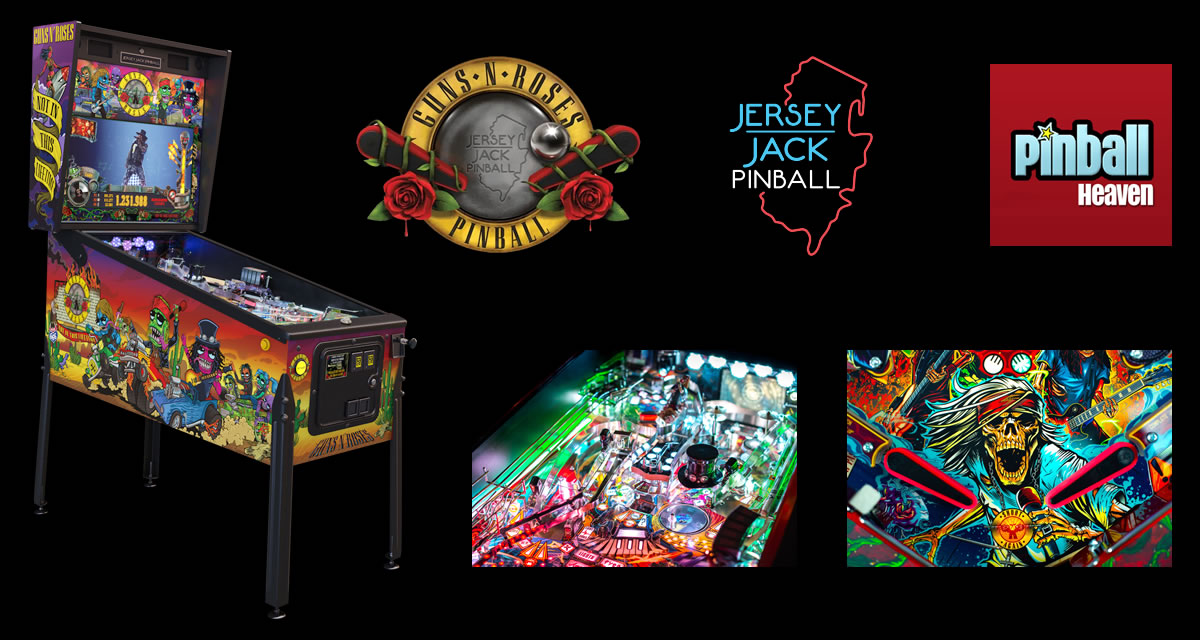 Following the speculation in our March 2019 Pinball Rumour Mill blog post, Jersey Jack have just announced the launch of their Guns N Roses Not in This Lifetime pinball machine.

Sold Out Within 4 Hours!

Confirmed by Slash in the San Francisco Weekly last July, Jersey Jack’s new Guns N Roses Not in This Lifetime pinball machine pays tribute to the band’s most successful tour, which took in 158 dates, sold over 5 million tickets and grossed almost $600 million USD.

According to a press release, the new Guns N Roses pinball machine was a two-year long passion project spearheaded by pinball enthusiast, Slash. In fact, the guitarist crafted specific plays and actions, recorded guitar riffs, music, voice, and video for the new game as well as, four unique guitar features for four playable modes in the game.

The process was especially hands-on for Slash, who commented, “It’s been a very fulfilling experience working with Jersey Jack on the new GNR Not in This Lifetime pinball machine. Jersey Jack pinball games are some of the most unique and beautiful pins ever made and I am honoured to have been able to work with their brilliant team to design one of the most original and exciting rock ‘n’ roll pins ever produced.” While Jersey Jack Pinball designer Eric Meunier adds. “To have this type of design work and participation from the game’s namesake creating the actual pinball game, has never, ever, been done before in the industry.”

The Guns N Roses pinball machine gameplay incorporates elements of the band’s sound and stage show through multiple LCD screens and customized LED lighting to replicate the “Not In This Lifetime” concert production; the playfield experience is designed around playing through the Guns N’ Roses entire 21-song setlist, complete with a concert stage and interactive spotlights.

In addition, Not In This Lifetime boasts five multi-ball modes, concert footage and animations, more than 200 LED lights, spinners shaped like guitar picks, plus sculptures of Axl Rose, Slash’s top hat and a stack of speakers.

All current members of the GNR line up contributed to the game, with Rose, Richard Fortus, Frank Ferrer, Dizzy Reed and MC Bob lending their voices and Duff McKagan and Melissa Reese providing the narration.

With the Collectors Edition having already sold out, the Standard and Limited Edition Guns N Roses pinball machines will be in high demand. So to reserve yours contact Jersey Jack’s Official UK Distributor, Pinball Heaven on 01772 816 677 today or visit our online shop.