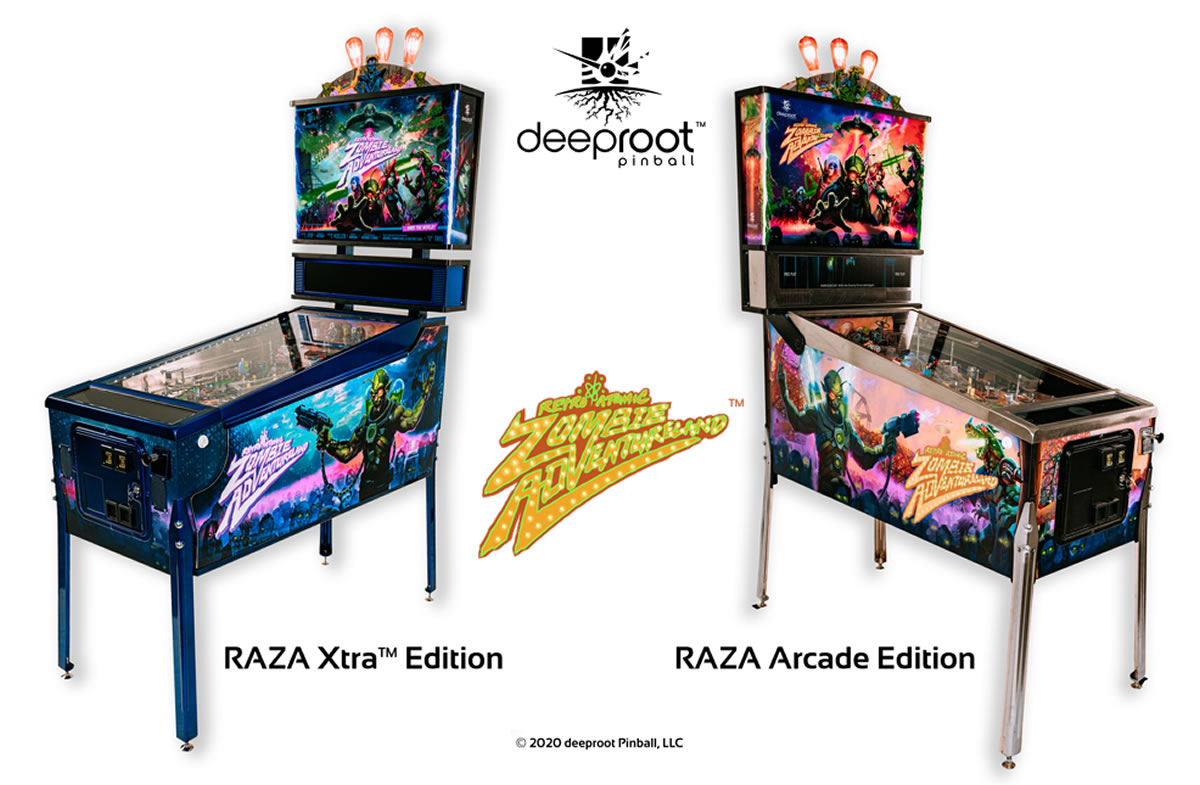 deeproot’s Retro Atomic Zombie Adventureland or RAZA Pinball Machine has finally been launched. Available in both Arcade Edition and XTRA Edition, which is limited to a production run of just 300 machines, this original themed pinball machine is bursting with originality and innovation.

deeproot pinball exists to elevate pinball ownership through exciting narrative-driven pinball experiences featuring immersive, interactive worlds under glass, by building value into every part of their business and innovative product lines. And it has to be said that in RAZA, deeproot appears to have achieved just that.

Designed by John Popadiuk, who worked on titles such as World Cup Soccer, Tales of the Arabian Nights and Theatre of Magic for Midway back in the 1990s, along with Cirqus Voltaire and Star Wars for Williams Electronics, Retro Atomic Zombie Adventureland is packed full of immersive features which engage the player at every turn.

The original theme of the RAZA pinball machine centres around an alien invasion led by Ned, the evil alien Invader. Angela, the heroic rebel princess, destroys a gravity drive which sends the alien flying saucers crashing into Adventureland, an amusement park built on an old graveyard and disused nuclear power plant. The crash releases xenon gas which brings the dead to life and Ned leads a zombie army to take over the world. You meanwhile roam around Adventureworld having fun, making life difficult for Ned and helping Angela deal with the Zombies.

According to Popaduik’s interview with This week in Pinball, “The game has stuff in each section of the game. Working around we have a double level “spook house” kickback on the left….something new, a rotating duck gallery target bank, double spinners, the “dizzy” which is like a floating TOTAN lamp, big zombie roller coaster ramps, an underground “xenon gas” tube area for ball locks, motor cycle jump device, new magna diverters and magna save and of course the classic swinging target from the 1960s you can bash, rollover buttons and the “atomic shop” to start modes and multi balls. Lots of other small items. The Ferris wheel is there too and shuttles the ball forward to the left “atomic” lane.

The idea behind all this is to give the player of any skill level something to flip, interact with, and feel accomplished. The ball is really wild and activates all this stuff, just like being in an amusement park. The play is fast, big loops, nice ramps and super up/down playfield action. Kinda’ a mix of 90s design with some 1970s mixed in. Instead of giving the player just 1 or 2 new features, we have a lot more to learn about and keep you excited. and with the great rules designed in the games has some really deep paths and ultimate direction.

With all this the art package was created to make it feel like an outer space amusement park. So, lots of stuff buried in the design, art, type and style for people to discover…”

Pinball Heaven are official distributors for deeproot pinball. To find out more about the new RAZA pinball machine or to reserve yours, call Pinball Heaven today on 01772 816 677 or visit our online shop.